We’ve been back home in Atlanta going on six months now and I still can’t seem to find the time to write. I seem to have lost my voice for the moment. A nasty comment on my last post may have affected me more than I want to admit. In any case, my writing self has lain dormant for a while.

The good news: the cats. They couldn’t care less. They have catnip . . . 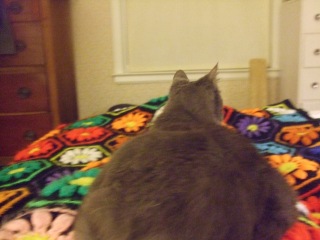 Never mind that their humans live in a part of the city hell bent on recreating past episodes of the Jerry Springer show for the entertainment of the neighbors. In the six months we’ve lived here, we’ve seen furniture thrown off the porch during a particularly dramatic spat, had to call the cops on a domestic dispute, dealt with teenagers who seem to have mistaken our front yard for their own personal football field, and headed to the back of the house when we heard gunshots.

And I love being here, in Atlanta, my home. I’m cooking again. I’m writing again. I will be back. Thanks for being patient.

One thought on “So much for being back”