Belatedly, I realize that the entire point of the Amateur Gourmet’s Blue Food Contest is to make blue food look “appetizing,” not necessarily chronicle the efforts of a slightly off-balance person to produce blue food without blue food coloring. Nevertheless, the hotly pursued Blue Velvet Cake, while not aesthetically stunning or really even that blue, was actually . . . good.

I think it would be perfect if you just added some blue food coloring.

Or if you knew how to use PhotoShop and could also insert a picture of Isabella Rossellini. 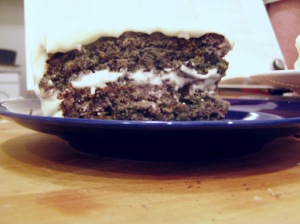 Fresh blueberries, or thawed, wild frozen blueberries when it is February and blueberries are $3.49/cup. Puree enough to make 1 1/2 c of puree.

Add to butter and cream until light:
1 1/2 c sugar

Divide batter evenly between cake pans. Bake 25 minutes or until cake springs back when lightly pressed in the center.

Mix above ingredients together until they are of consistency and sweetness you prefer.

And now the insanity is over. I can’t imagine that I will win the contest unless the Amateur Gourmet and Michael Ruhlman take pity on someone who devoted AN ENTIRE EVENING to creating FOUR BLUE FOOD RECIPES FROM SCRATCH even though she will probably never make it to New York to see the Blue Man Group.

But IF there is some kind of consolation or pity prize–say, having the Amateur Gourmet go out to dinner with us if he returns to the ATL–hell, I’ll take it. 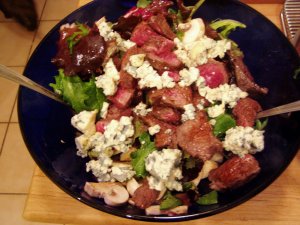 We will coninue the Blue Extravaganza with something that barely qualifies as a recipe because it’s so easy. And it is really not blue, just “bleu,” which being French probably qualifies it for the Blue Food Contest. 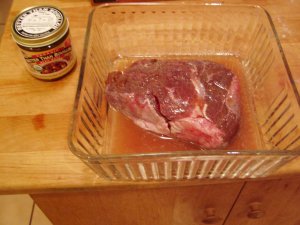 Marinade a 12 oz. buffalo steak in 1/4 tsp. organic Better Than Bouillon Beef Base Bouillon whisked with 1/4 c red wine vinegar and salt and pepper to taste. (My Italian friend Claudia believes that beef bouillon and vinegar mellows gamey meat, and I always follow the instructions of Italians when it comes to food.)

Make a lot of other blue food and let steak sit out entire time in marinade. Pray buffalo is not a good source of E. coli.

Heat up iron skillet for several minutes. Add about 1 tbsp. olive oil. Sear steak on both sides to taste (for me, 3 minutes on each side). Cut steak into thin, bite-size strips for salad.

If food poisoning fears emerge at the sight of bleeding, oozing flesh, toss pieces back in the skillet. Don’t overcook as buffalo can get tough very easily.

Pour 1 container washed mixed baby greens into bowl, remembering after California Spinach Disaster that greens can harbor E. coli as well as buffalo but not caring. Baste with the following, whisked together:

If you’re a professional chef, coming up with an entire dinner of blue food in three hours is probably a snap. If you’re not, here’s where you need to start:

A normal person probably would have been happy with just a Blue Velvet Cake recipe for the Amateur Gourmet’s Blue Food Contest. But, as was established during the creation of Sunday’s lurid Greenish-Purple Velvet Cake, that would not be me.

Instead, discovering the contest only on Sunday and having to travel all day Monday, I set out to make ENTIRE DINNER of blue food on Tuesday. After work, starting at 7. With no food coloring involved.

The menu was in my head: blue cornbread, buffalo steak salad with bleu cheese, and, of course, the Blue Velvet Cake. Ingredients were purchased. (The Blueberry Martini was merely a last-minute, desperate effort that resulted from a lack of wine.) All I had to do was invent–and, for once, write down–the recipes.

For the blue cornbread, I turned to Southern Cornbread in Cook’s Illustrated’s The Best Recipe. Why I turned to a cookbook written by Yankees to make Southern cornbread I don’t know. But at least it was blue:

That is, until you cooked it: 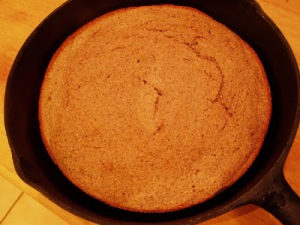 It WAS blue on the inside, but I was too ashamed of how flat it was to take a picture. (I hope my mother doesn’t read this. Also, please don’t tell her I really like that sugary Yankee cornbread.)

Below is the recipe for blue cornbread that I WOULD make if I had time and didn’t have a full-time job. Please feel free to try it and let me know if it works.

And now I have to go to work. More later. 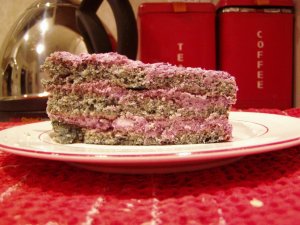 The first attempt for the Amateur Gourmet’s Blue Food Contest went . . . well, it went like this.

What you see above is not molded cat litter covered with grape Jell-O, but a Blue Velvet Cake– blueberry cake with blueberry cream cheese frosting.

I have made some important discoveries throughout this process.

One: Fresh blueberries cost $3.49 a cup in February.
Two: Pureed blueberries mixed with cream cheese = garish pinkish/purple nightmare.
Three: I am not normal. Witness conversation below with a co-worker:

Me: So there’s this Blue Food contest on the Internet, and I’ve been working on an entry.

Me: Yes, blue is supposedly the most unappetizing color for food, so this contest is to see what people will make. I’ve been on a quest for the perfect red velvet cake, so I thought I’d try a BLUE velvet cake. I’ve got these blueberry cake recipes and I’m going to try to modify them–

Me: But I want to figure out how to make it with blueberries.

Me: Two tickets to see the Blue Man group in New York.

Co-Worker: But we’re in Atlanta.

Back to the kitchen.

The Amateur Gourmet has started a Blue Food Contest.

I have been to the Farmer’s Market. I have three days to come up with an entry. Will post updates as they happen.

I truly, truly believe that stock is perhaps the most underrated cooking necessity on earth.

This is sad, because stock is painfully simple to make:

1. Cook any kind of meat with bones (chicken, turkey, ham, whatever).
2. Put the bones, skin, and leftover bits of flesh in a pot. Cover with water. Cook on low heat for several hours. If you are lazy, or don’t have time, however, you can start on medium high heat until the water is getting hot (don’t boil), then turn the heat to low and cook for an hour or so. It’s still going to be better than canned.
3. Pour your stock through a collander.
4. Make sure a bowl is under collandar–nothing is more unpleasant than watching your stock go down the drain. (I know this from personal experience.)
5. Let stock cool, pour into 1-quart freezer containers and freeze.

When you want stock for your soup, just pop one of those containers in the microwave for five minutes to loosen, then add the stock when the recipe calls for it. Don’t worry–with the heat and all, it WILL MELT. Very quickly. So quickly that if you’re not careful, you’ll end up with incidents like the Cauliflower Disaster below.

You will make all your friends jealous.

Today, some photos of my kitchen because we are eating out and I’m not cooking. But here’s where I do it: 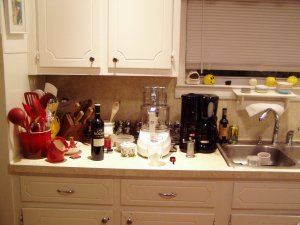 The World’s Most Perfect Small Appliance is appropriately in the center of the countertop, along with a beloved bottle of the Las Rocas Garnacha. The red thing that looks like a piece of plumbing material is our salt pig–if you do not own one and use sea salt as much as we do, get it.

Please disregard the dirty dishes in the sink. Despite the presence of a dishwasher, the dishes always seem to prefer to take up residence there.

And here would be the $900 Consumer-Reports-recommended stove with an oven that’s a mere 50 degrees off. But it does have a warming tray and an eye that cooks on very low heat.

And here is the other side of the counter top, with another Beloved Kitchen Appliance–the KitchenAid mixer, which is too heavy and too large to go anywhere else. Oh, and is that ANOTHER bottle of Las Rocas Garnacha?

Finally, the fridge, as big as the whole damn kitchen but bought really cheap at Sears Scratch-n-Dent. As you can see dents really don’t matter:

Finally, here I am actually in the kitchen eating a big wad of ham and saying, “Bye ya’ll, gotta clean the house because people are coming over and there are DIRTY DISHES IN THE SINK!!!”

The Newlyfeds
Blog at WordPress.com.