It’s been a year and a half since the Great Hot Pepper Avalanche at the community garden at St. John’s Presbyterian Church–and we’re still struggling in the aftermath.

Constitutionally incapable of letting food go to waste, I spent an afternoon gathering every stray pepper from the garden before the first frost. I ended up freezing five one-gallon bags of Serrano and jalapeno peppers. The date was October 10, 2010. (I believe in labeling.)

In the ensuing months, the peppers were flung into soups, tossed over the top of pasta, and folded into eggs. They were roasted and stirred into salsa. They were minced and spread over quesadillas. They were seared with steaks. Eventually, they were moved 384.93 miles from Durham, NC back to Atlanta.

As of today, we still have 2 gallons left.

Freezing, it turns out, is an excellent way to preserve Serrano and jalapeno peppers. A dreadful experiment with drying, and the recommendation of a friend, led to my discovery of this. Freezing preserves most of the flavor and is incredibly easy. I did nothing to the peppers–didn’t even wash them–before I placed them in the bag (labeling them, of course), and put them in the freezer.

When I need them, I usually set the whole peppers into whatever I’m sauteing to thaw a bit before I chop them up and add them to the dish. Sometimes, if guests are coming, I remember that I never washed them and rinse them beforehand.

One of the best experiments to come out of  the Great Pepper Avalanche is this cole slaw. Fred loves a finely chopped cole slaw, and we both love the kick from the peppers. If you have a food processor this dish is also remarkably easy to prepare. It’s an excellent side with a mild white fish or as an appetizer spread over crackers.

I’m reluctant to give exact proportions for mayonnaise or salt. Let your taste be your guide. The more mayonnaise, the creamier the texture and the milder the slaw, since it seems to counteract the heat of the peppers. In the version below, I used about 3/4 to 1 cup of Hellmann’s Light (a concession to middle age). 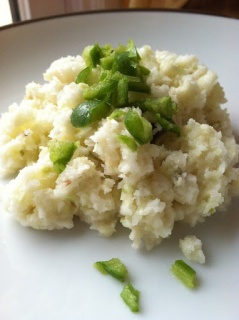 Mince cabbage and onion in food processor until finely chopped. Transfer to large bowl. Stir in mayonnaise in approximately 1/4 cup increments until slaw is to desired consistency and taste. Add salt to taste.

One thought on “Cole Slaw with Serrano Peppers”