Dear readers, I regret to say that I lied to you at the end of my last post: “I discovered that you can make good artisan bread with no recipe at all.”

I’m not sure why I suddenly took on the tone of a Google sidebar ad (“I got white teeth for only $1. Find out how”), but to be fair things did seem to be heading in that direction. What I should have said was a little less glamorous: You need a recipe, but artisan bread isn’t that hard. 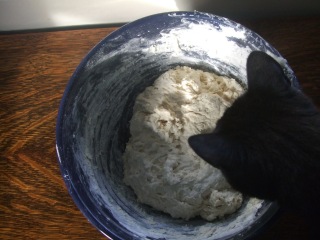 Cleo: “Even I can make artisan bread!” (Note: She was whisked from the scene before she got a chance to prove it.)

Thought it isn’t hard, it involves several steps and takes a couple of days to make–which means that recipe testing is taking longer than I originally anticipated. So it will be a while before I can post on this topic.

I’ll be turning to other subjects in my next few posts. In the meantime, though, check out this fabulous site on artisan bread to learn  from someone who actually seems to know something about it.