In the spring of 1991, my reputation as a pie baker was born, emerging out of a strawberry-rhubarb pie I made for my roommate, Carol.

Until that point, Carol believed that pie crusts were available only in the freezer section of  your local supermarket. Though her parents were both French, living in Wisconsin had apparently sapped away every vestige of their culinary heritage, leaving them only with the knowledge of how to brew coffee and cook sausage. I, on the other hand, took great pride in my crusts and my recipe, taken straight from the back of the Crisco can.

The strawberry-rhubarb pie, made from ingredients picked up at the legendary Madison Farmers’ Market, was apparently a revelation to Carol. It seemed a bit on the watery side to me, but she talked about it non-stop for nearly a week. “That was the best pie I’ve ever had,” she said. Twin Peaks was running at the time; she sounded like Agent Cooper at the counter of the R & R Diner.

So thrilled was she that she gave me this copy of Farm Journal’s Complete Pie Cookbook as a birthday present that year. 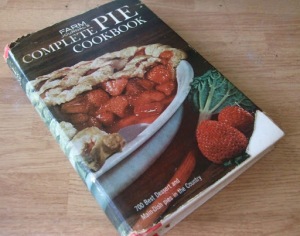 Written in 1965, this book chronicles a lifestyle that was already under siege by the agricultural industrial complex the moment it hit the shelves. I know this; I was born on a farm in 1965, and by the time I was in kindergarten my life was considered so exotic that it was turned into a field trip for my class. Thus a herd of five-year-olds was shepherded from the safety of suburbia to our farm, just a few miles outside the “city” of Cleveland, Tennessee. They looked at cows. They wisely ran in fear from the chickens. They stepped in little piles of manure dotting the fields and probably littered the freshly mopped floors of their homes with fecal matter within hours.

But I digress. I love the way that Farm Journal’s Pie Cookbook evokes a fantasy farm life, where green fields stretch out into the summer evening while swallows twitter overhead. Some samples:

“Peach pie is a reward tired and hungry men who have worked late in the field trying to finish a job really appreciate,” one farm woman says.

We certainly had moments like this on our farm. But we also had these:

Farm women think canning beans in August is about as much fun as a colonoscopy, but they know that both things need to be done.

Farmers are the kind of people for whom “vacation” means waiting till the next day to fix the tractor.

The book also contains recipes for pies that never appeared on our table–not surprising, given regional differences in American cuisine. Of course, I was drawn first to these more exotic pies (at least to me)–elderberry, currant, mulberry. One of these, Concord Grape Pie, has become a fall favorite. The filling reminded me of the juice and jams Mammaw made a few times from the grapes in our orchard. Just imagine the best homemade grape jam you’ve ever had, a grape jam with rich earthy undertones that’s not overly sweet–then you’ll have an idea of how this pie tastes. 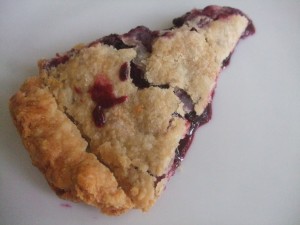 Greed prevented us from getting a better photo.
By the time I thought to get the camera, this was all that was left.

When the grapes come in this fall (September and October), you have only a few weeks to make this pie. It’s like those farms in 1965–their time on this earth is, sadly, too short.

Wash grapes and remove skins by pinching at end opposite stems. Reserve skins. 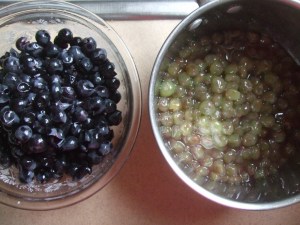 Place pulp in saucepan and bring to a boil; cook a few minutes until pulp is soft. Put through strainer or food mill, while pulp is hot, to remove seeds.

Place grape mixture in pastry-lined pie pan. Cover with crust, cut vents, dust sugar on top, and flute edges. Bake at 425 for 10 minutes, then reduce heat to 350 and cook an additional 50 – 60 minutes.