Fred pretends to be adventurous. After all, he’s the artist–the one who moved to New Mexico on a lark to make his life as a painter; the one who likes to horrify me by wearing white athletic socks to social events; the one for whom “CD investments” means spending too much money on jazz recordings in the late 1990s.

But the truth came out on a recent Sunday venture after church, when we decided to eat out before running some errands. Driving away from the service, I said, “Why don’t we stop at one of those little Mexican restaurants on Roxboro?”

Fred squirmed–actually squirmed–moving back and forth in his seat. “Which one?” he said, fear coming in to his eyes.

“I was thinking about that little place right after the church on the left.”

“What do you mean? Are you afraid you’ll order something that tastes bad?”

He thought for a minute. “I’m afraid there won’t be anything I recognize on the menu.”

Poor Fred was trapped, and he knew it. If he refused, he’d lose his cachet as the zany artist, the free spirit eager to seek out new experiences. I had him. 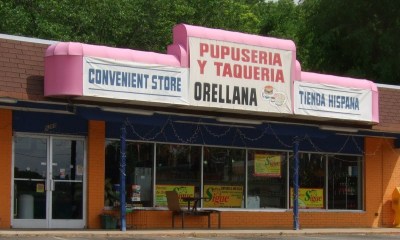 To be fair to Fred, it’s a stretch to describe this place as a restaurant. The dining area is in the back of a convenience store featuring Mexican and Latin American products. It consists of an order window, several colorful plastic booths, a large-screen TV, and a fascinating stone fountain with potted plants set up along the back wall in an empty refrigerated case, shelves and doors having been removed. With the exception of the fountain, it’s a lot like the fast food places you’ll find attached to a gas station at an Interstate exit.

Unlike a fast food joint at a gas station, though, the food here was fresh, clearly prepared to order. Much to Fred’s horror, there were no carnitas on the very short menu, which kindly offered some English translations. But he found comfort in a miraculous sandwich, a torta de carne asada. This featured thin slices of spiced meat on an enormous bread roll good enough to be homemade: white on the inside, dark brown and crusty-soft on the outside. It also included generous amounts of mayonnaise, lettuce, tomato, jalapenos, and “a special cheese”–a soft, mild white cheese I’m afraid I can’t identify.

The sandwich calmed Fred. Here were recognizable items–meat, bread, jalapenos, cheese–and he wasn’t being forced to speak Spanish. With his anxieties under control, I was able to turn my attention to my own order–tacos with tongue (lengua), cabeza (pig’s head), and al pastor (spiced beef).

These were wondrous creations. Each was covered in neatly diced onion, cilantro, a slice of avocado, and fresh limes. The salsa–a sauce in the traditional Mexican sense, not our American tomato-based tortilla dip–was thin, sharp and vinegary. The meat was tender and nicely seasoned. (There were, by the way, plenty of offerings for the less adventurous: chicken, carne asada, chorizo).

We also enjoyed a tamale, which resembled a giant hush puppy with a moist, cake-like interior, and a pupusa de queso. There’s a nice description of the pupusa here: it’s a Salvadoran dish consisting of a corn tortilla stuffed with a variety fillings, such as meat or cheese. The pupusa de queso here included Salvadoran and mozzarella cheeses. I’m sure mozzarella is not native to El Salvador, but it worked nicely in combination with the slightly sour Salvadoran cheese.

Fred was happy when we left. His response the next Sunday was predictable. “Can we stop at that place again?”