I seem to be the only person in Durham–or perhaps the nation–who is excited about the goat kidneys I found at the Durham Farmers’ Market a couple of weeks ago through Meadow Lane Beef farm. The near-universal response to the news that we’d tried them was a wrinking of the face, followed by an “Euw!” or an “Ugh!” or the occasional polite “Oh.”

The horror, though, was inevitably followed by curiosity: “So . . . what did they taste like?”
Fred described the flavor as “what you wished a giblet tasted like.” I said they were a cross between liver and a chicken thigh. The texture closely resembled that of liver, just firmer and with no tendency to crumble.

Unable to find a recipe for goat kidney even on my overburdened cookbook shelves, I turned to James Beard’s recipes for lamb kidney in his American Cookery.

Beard sure does love his offal. True, he devotes only a small section of the book’s 850 or so pages to the subject–but then again, he doesn’t even offer a recipe for cheesecake. Describing cakes, cookies, and other typical confections, he shows about as much enthusiasm as someone about to clean a bathtub: “This is a popular cake for church picnics.” “This cookie has an unusual flavor that is not unpleasant.” But when it comes to lamb’s tongues, he speaks as he would of a long-lost love or a beloved, recently departed parent:

There was never a time, it seems to me, when there were not some pickled lamb’s tongues on the shelf of our family larder. They were used for a quick snack, for a cold supper, for sandwiches, or for picnics. And how tender and delicious they were . . . . I fear that lamb’s tongues are lost to most people today, who won’t take the trouble to prepare them and don’t know what eating pleasure they are missing.

His descriptions of lamb’s kidneys were equally rhapsodic, so Fred and I eagerly anticipated trying the goat.

The kidneys were very easy to prepare. First, I removed the little tube in the kidney and the white gristle-y parts. Then I soaked them in milk for about an hour. 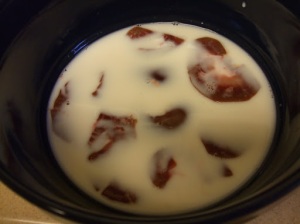 I brushed them with olive oil, seasoned with salt and pepper, and broiled about 5 minutes, turning once. The most important thing, it seems, is not to overcook them.

They were not as rare as James Beard suggested, but that was fine with us on our first try. 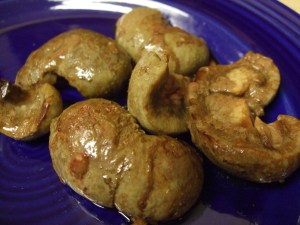 The verdict? We’ll try them again. And if anyone knows where we can get lamb’s tongues, please let me know.