It’s embarrassing to start two blog posts in a row with the phrase, “It’s a little embarassing . . .” So be it.

It’s a little embarrassing to have lived in Durham for over two years and never to have visited the Farmers’ Market. My early complaints about store produce were always met with tching from friends, who would scold, “You just need to go to the Farmers’ Market!” But their admonitions were also laden with various qualifications, “It’s small.” “You need to go early.” “It’s only on Saturday.”

Such comments had led me to expect a dozen or so ragtag booths, populated by earnest, tie-dye clad organic farmers, each with three or four tomatoes and some salad greens on display, all of which would have disappeared by 9:00 a.m. Why would I drag myself out of bed on the only day of the week I can truly sleep in for that?

Yesterday morning, though, I found myself in unusual circumstances. First, I was Fredless, since he was working a 24-hour shift at the hospital where he serves as a chaplain. Second, I was awake and about by 9:00. It was a gorgeous morning and I had nothing to lose, so I figured I’d stop by the Farmers’ Market and see what it had to offer.

Quite a bit, it turns out. First, there were these tiny heirloom tomatoes from Bluebird Meadow Farms. The orange ones could well be the sweetest, most perfect little tomatoes I have ever eaten.

I ate about half of them plain, then put the rest in this salad of olive oil with a dusting of sea salt. It turns out that plain was best–they were simply so perfect that the extra flavoring was wasted. 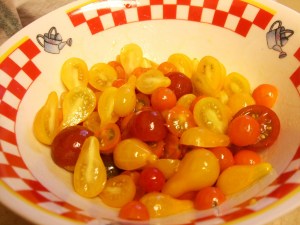 There were also these baby eggplant, though I can’t remember where they came from. They are coated in kosher salt, waiting to be broiled with olive oil and pepper as I type this.

Best of all, however, was this:

These are goat’s kidneys, from Meadow Lane Beef farm. Neither Fred nor I have ever tried kidneys, but they are soaking in milk and will be cooked for supper tonight. They are supposed to be quite tender and delicious. I will post results.
Durham Farmers’ Market, I am sorry I ever doubted you. I will be back!

One thought on “Finally–Durham Farmers’ Market”