I am pleased to report that 4-H and Lidia did not let me down in yesterday’s focaccia attempt, even though I misspelled Lidia’s name. Neither did my Cuisinart–a valuable ally who was not present during my youthful struggles with yeast breads, nor during later misguided attempts to make bread without “cheating” (i.e., doing things in an easier and more efficient way).

I hope that Rocco, whose actualy birthday is today and in whose honor this bread was made, will be pleased with these results.

Here is the recipe, modified slightly from Lidia’s Italy–a beautifully illustrated collection of Italian recipes that I highly recommend.

Makes 1 large round; serves 10 or more as a side dish

Dissolve yeast in 1/4 c. warm water and let it sit for several minutes, until it begins to bubble. Put flour and salt in food-processing bowl. Stir together yeast and 2 c. lukewarm water in spouted measuring cup. With processor running continuously, blend flour and salt briefly, then pour in all the liquid through the feed tube and process for about 30 seconds. A soft, moist dough should gather on the blade, with some sticking to the sides of the bowl. Add more flour, 1 tbsp. at a time, if dough is too sticky and has not come off sides at all; add more water in small amounts if it’s too dry.

[NOTE: I misread the recipe and added the yeast directly into the 2 c. lukewarm water, then poured into the food processor before it bubbled. But luckily focaccia is a forgiving dough.]

Turn dough out onto a lightly floured surface (I used a clean, non-fuzzy kitchen towel), scraping bowl and blade clean. Knead by hand for a minutes, using as little flour as possible, until dough forms a smooth round, still soft and a bit sticky. Coat a big bowl with olive oil, drop in dough, and turn to oil it all over. Seal bowl with plastic wrap and let rise in a warm place until doubled, 20 – 30 minutes (1 hour if using regular yeast).

After the dough has risen, it should look like this: 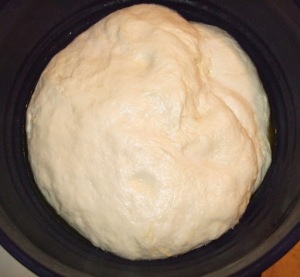 While dough is rising, toss together onions, tomatoes, 4 tbsp. of the olive oil, and 1/2 tsp. salt in small bowl and let them marinate. 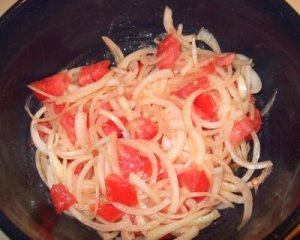 Coat a large shallow baking dish or pan, bottom and sides, with 2 tbsp. or more olive oil. Deflate risen dough and lay it in the pan. Gently press and stretch it into an evenly flat round (or square, as you see below) that fills the pan. If dough is resistant, let it relax a few minutes.

Lift the marinated tomato and onion out of the bowl with a slotted spoon, draining off juices. (Lidia failed to mention you are to reserve these, so I ate them.) Scatter vegetables all over focaccia. Lightly press in with your fingertips to create dimples in the soft dough. Drizzle the marinating oil that you did not eat over the top, or if you did eat it, olive oil works quite well. It will look like this: 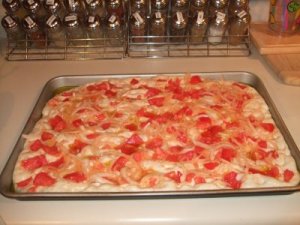 Let the focaccia rise, uncovered, for about 20 minutes. Set a baking stone, if you have one, on center rack in oven and heat to 425. Just before baking, gently dimple the dough again with your fingertips, and sprinkle another 1/2 tsp. coarse salt all over.

Puzzle over why Lidia ever expected you to slide this enormous square thing onto your round, medium-sized pizza stone, which perhaps is different from a baking stone but you aren’t sure. Decide that Lidia probably left out a sentence or made a typo, and anyway you have only 5 hours till your dinner party and can’t afford the disaster that will surely occur if a transfer is attempted. Set pan on top of the pizza stone in the oven and cross fingers. Bake focaccia for 20 minutes, rotate pan back to front for even cooking, and bake 10 – 15 minutes (or more) until bread is golden brown and onions and tomatoes are nicely carmelized.

Remove from pan and top with remaining olive oil and crumbled oregano. Let cool at least 15 minutes before slicing. Serve warm or at room temperature. 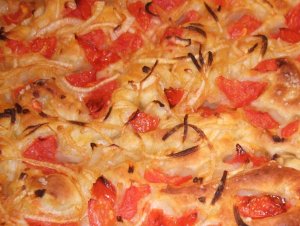 Give thanks for wonderful bread and friends. Wonder if Martha White would let you enter this in the next 4-H breadbaking contest.