For the first time in the 20+ years my sister Jinjifore and I have been adults, I forgot to call her on her birthday yesterday. So in belated commemoration of her birthday, here are a couple of memories from earlier times, when someone else was in charge of remembering birthdays and all we had to do was eat the cake. 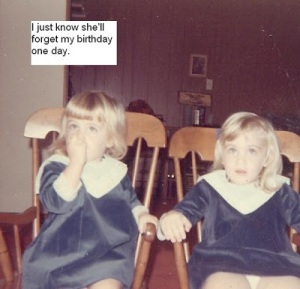 Today’s potato casserole recipe is in Jinjifore’s honor. (In case you’re wondering, Jinjifore is a childhood nickname for Jennifer, which has stuck to her like a fly in ointment.)

The first potato casserole recipe I tried was “Golden Parsley Potatoes,” from Diet for a Small Planet. It was during a heady, crazy six months in the late eighties when I lived as a vegetarian, in solidarity with migrant workers oppressed in chicken factories, African farmers who could not survive because all the grain in the world was going to feed factory-farmed cows that were headed straight to McDonald’s, and cats. (You know: I wouldn’t eat a cat, so why would I eat another animal?)

Now, I have not completely given up on these ideals, but I realize that my refusing to eat any meat whatsoever was probably not going to make much of a difference. And then of course I married “I love vegetables especially when they are accompanied by a slab of flesh” Fred.

But last night, unconstrained by the need to work bacon, ham, hot dogs, or steak into the meal, I returned to potato casserole. The recipe below is based on “Golden Parsley Potatoes,” which is a wonderful recipe but which I don’t currently have access to because it’s in a storage locker off I-285 right now. It was not entirely vegetarian, as I used the remaining chicken fat from a roast chicken earlier in the week. But frankly I think it would have been better with butter, which is why that is featured in the recipe below.

The beauty and poetry of potato casserole is its variability. Few things taste bad when mixed with potatoes, as the inventor of the restaurant potato bar will tell you. So this recipe contains infite possibility–just like life when you’re 3 and your sister has not yet forgotten your birthday.

4 large russet or Yukon Gold potatoes, peeled if desired and sliced thin
1/2 stick butter
2 large yellow onions, peeled, thinly sliced
1 clove garlic, minced
2 cups grated cheese (any kind will do!)
Salt and pepper to taste
A little cream or half and half

Cook potatoes in salted water until just tender and drain. While potatoes are cooking, melt butter in medium to large skillet on medium heat. Saute onions until translucent. Turn off heat, add garlic, and stir. Preheat oven to 350. Layer potatoes, onions and cheese in medium sized casserole dish (potatoes, onions and garlic, cheese). You can break potatoes into smaller pieces during this process if you wish. If you like a creamy, moist casserole, pour a little cream (1/4 cup or so) over the top. Bake for 30 minutes.

Variations: 1) Last night, before adding the final layer of cheese, I poured 1 cup plain tomato sauce mixed with about 1/4 cup cream over the top of the casserole. This was nice and gives the dish a slightly Italian feel. You could also add olives, capers, anchovies, or similar items to make it “Sicilian” (just remember to add less salt!). 2) Add ham, bacon, or other pork. To add, saute along with the onions and layer with them as well. 3) Add cooked chicken and parsley.

Jinjifore, I promise to call today!